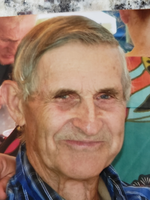 Emerson L. DeKalb Granville, NY – Emerson Lee DeKalb, age 86, passed away at home on his farm on June 2, 2019 following a long illness. Emerson was born on September 9, 1932 in Granville, New York the son of the late Clinton E and Pearl I. (Lee) DeKalb. Emerson was a graduate of Granville High School. Upon graduation he and his cousin set off on travels that would take them to 49 of 50 states. They decided before settling down to life's commitments they wanted an adventure to last a lifetime. When they ran out of funds, they would see employment wherever they were, in order to continue their adventure. Upon his return, he married Rosetta Bourn. Emerson started his own farm, a mere mile or so from his family farm. At first, he tried to work a day job at Telescope and farm in his off time. But that proved to much, even for someone who was as hard a worker as he was. He left Telescope and worked full time on his own farm, where he literally spent the rest of his life. As farmers tend to, Emerson lived the out of doors. He enjoyed hunting, trapping and fishing. He also liked to hike throughout the area. But without a doubt, Emerson loved spending time with his grandchildren. He was working so hard when his own children were growing up, he missed out on lots of day to day life events, but he wasn't going to miss out on those with his grandchildren. Emerson was predeceased by his parents, a grandson Tyler Matthew DeKalb, and his beloved wife Rosetta. He is survived by his three children Debra (Cyrus) Dunbar, Clinton (Johnna) DeKalb and Marcy (Eric) Ferrin all of Granville. He was blessed with fifteen grandchildren: Ryan (Samantha), Nicholas (Olivia), Jamie, Cody, Jennifer Rose, Cameron Lee, Devin (Natsumi), Erin, Kimberly (John), Alexis, Brennan, Briana, Ayva, Julie and Jayze and five great grandchildren. He is also survived by his siblings: Freida Wilson, Cathy Freudland, Ken, Roger and Donald (Sharon) DeKalb and Dorothy (Richard) Parker, in addition to numerous in-laws. A funeral service will be held on Wednesday at Noon at the Robert M King Funeral Home, 23 Church Street, Granville, NY. Friends may call from 10 AM – 11:45 prior to the service. Burial will follow at the Elmwood Cemetery in Middle Granville. Those wishing to remember Emerson may make memorial contributions to St Jude's Tribute Program, POB 1000, Dept. 142, Memphis, TN 38148.