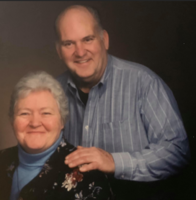 Walter E. Nadeau Granville, NY – After a very long illness, on October 18, 2020 Walter Ernest Nadeau ran into the loving arms of his savior, Jesus. He was reunited with his wife Carol and his beloved mother, Gertrude. Walter was born on January 9, 1944 in Grangerville, NY the son of the late Walter J. and Gertrude (Squires) Nadeau. He graduated from Argyle Central School and also resided in the Granville area. Eventually he made the move to Deltona, Fl. Walter was self-employed most of his life primarily working and living in New York State or Florida. When he retired and moved back up north, he lived in Whitehall until his health declined at which time, he became a resident of Slate Valley Nursing and Rehab Centre in Granville. He enjoyed decorating their homes through the years as well as traveling with his wife to various lighthouses along the east coast. Wally was a very generous man and always willing to help anyone in need. Walter was predeceased by his parents, his wife Carol, and an infant grandson Joshua. Left to cherish his memory are his children: Jeffery (Colleen) of Maitland, FL, Dwayne (Jo-Ann) of Granville, NY, Jarrod (Sandra) of Debury, FL, Darren (Shelia) of Lenoir, NC, and Jason (Kerri) of New Smyrna, FL. He was blessed with many grandchildren and great grandchildren. He will be missed by his siblings: Beverly Orie (Tom) of Lake Pine, FL, Sandra Horsfield (Roy) of Grangerville, NY, Allene Hanna of Argyle, NY and Deborah Walgron (Roger) of Queensbury, NY in addition to his nieces and nephews. The family wishes to express their sincere thanks to the staff of Slate Valley for the care and attention given to Walter of his 17 ½ year stay with them. Memorial contributions may be made to the American Diabetes Foundation, Pine West Plaza Washington Ave. Extension, Building 2, Suite 204, Albany, NY 12205. Funeral arrangements were entrusted to the Robert M King Funeral Home, Granville.