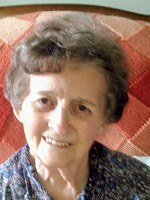 Patricia W. Chapman West Granville, NY – Patricia W. Chapman died peacefully on September 12, 2021, at Slate Valley Center following a short illness. Patricia was born on September 30, 1932 the daughter of the late Ossian B. and Marion E (Douglas) Ware of Middle Granville, NY. Pat graduated from Granville High School in 1950. She worked as a secretary for the Tatko Slate Co. until 1964 when she became a homemaker, raising her family in their home in West Granville. She married William T. Chapman on August 21, 1955. Pat was predeceased by her mother-in-law Florence Chapman; sister-in-law Margaret Ware, parents, her brother Donald A. Ware, nephews James and Jeffrey Ware, her husband's siblings, and spouses: Wilbur and Olive Chapman, Alice and Lynn Pepper and Nellie Liebig, and a nephew Gary Liebig. Pat was predeceased by her husband William on May 7, 2005, after 49 years of marriage. Pat is survived by her daughters: Kathy Chapman and Susan Whitney (Peter) both of Granville, her granddaughter Jennifer Whitney of Granville, a brother Douglas Ware of Connecticut, sister-in-law Virginia Ware and several nieces and nephews. The family would like to extend their sincere thanks to the staff of Tower 3, Dr.'s Stoutenburg and Tedesco of Glens Falls Hospital, the staff at Slate Valley Center in Granville and High Peaks Hospice. A special thank you to Keith Jordan who has been a quiet, dependable, and steadfast support over the past several years of Patricia's home care, and to Tammy Rooke, an amazing and gifted caregiver. The funeral for Pat will be private and at the convenience of the family. Online condolences may be made at www.robertmkingfuneralhome.com (»(Do not delete this line. It does not print. Text that is to appear on web must be entered before this line)