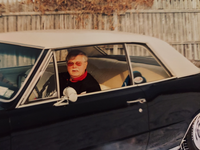 Steven P. Morse Granville, NY – Steven Paul Morse, age 72, passed away after a brief illness. Steve was born in on May 11, 1949, in Granville, NY the son of Oliver and Helen (Volk) Morse. He had a passion for music and cars, especially GTO's. Steve put on many benefits shows and also DJed with his wife Nancy. Steve retired from Saint Gobain in Granville, after many faithful years. He will be missed by many. He was predeceased by his parents, two brothers Bernard and Donald. He is survived by his wife of 22 years, Nancy (Lippy). He was blessed with a son Steven O Morse who lives in Buffalo. He was also a grandfather to three grandsons: Aiden, Nathan, and Zackary. A brother Dr. James Morse also survives him. There will be no calling hours or funeral at this time. Online condolences may be made at www.robertmkingfuneralhome.com.