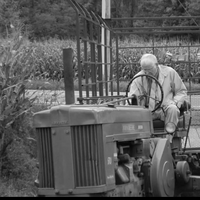 CELEBRATION OF LEON R CLARK SR's LIFE A funeral service will be held on Saturday April 16, 2022, at 11 AM at the Robert M King Funeral Home, 23 Church St., Granville with the Rev. Susan Hardman-Zimmerman. Friends may call from 10 AM until the time of the service. Following the service, he will be laid to rest in the Wells Village Cemetery, Wells, VT. At the conclusion of the burial the family invites friends and family to a gathering at Leon and Dawns home in Pawlet for a final John Deere Celebration. Leon R. Clark Pawlet, VT - Leon R. Clark Sr 83 of Pawlet VT died Feb 11, 2022 after a long decline in health. He was the youngest son of Wilson & Dorothea (Streeter) Clark. He was predeceased by his beloved wife Dawn Cleveland Clark, after 55 wonderful years together, and brothers Wilson (Bill) and John (Jack) Clark. He is survived by his son Leon Clark Jr daughter-in-law Alane Clark, a daughter Lynn Cooper and son-in-law Alan Cooper, and three granddaughters and five great-grandchildren. Leon was influenced early in life by Harry Streeter, Ed Connor, and Ken Fiefield. Anything mechanical captured his attention. While Leon never officially became the shop teacher he had hoped to be in his youth (he left the teaching to Dawn) he would spend many hours fixing and improving engines and equipment. He got his electrician's license and with help from family built his and Dawn's family home where they hosted many family gatherings over the years- his beloved "John Deere Day" a family favorite hosted on his birthday to celebrate his family, his tractors and him. Leon drove a milk truck with his brother Jack and later nephew Joe for many years. He was active in the Pawlet Church, Poultney Methodist Church, a lifelong member of Pawlett Historical Society, and on the Pawlet Planning Commission from 1967-1988. Leon enthusiastically; and at times less than enthusiastically, collaborated with his son's many farming adventures, from the first 4-H cow until he could no longer drive a John Deere. Leon was blessed to spend time with his devoted daughter Lynn on many road trips and craft projects. He loved his tractors, trains,westerns,repairing clocks, going to Maine, and farm fairs. But above all he loved his family, his children, grandchildren and great grandchildren. He was a kind and generous father, father-in-law, grandfather and neighbor, who will be greatly missed. A service will be held this Spring, date and time to be determined. Online condolences may be made at www.robertmkingfuneralhome.com