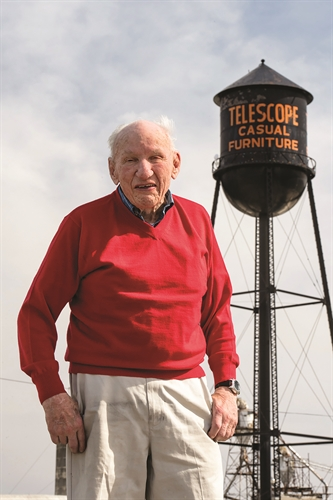 Please share a memory of Robert to include in a keepsake book for family and friends.
View Tribute Book
Robert D. Vanderminden Sr. Granville NY – Robert Dudley Vanderminden Sr. passed away peacefully at his home on Thursday, December 27, 2018. Bob was born in Brooklyn, New York in 1927, the son of Henry J. W. and Cecile L. (Huelsman) Vanderminden Jr. By the time of his birth, the manufacturing operation of the cot and camp stool company his grandfather founded in 1903 had moved upstate to Granville. In 1932, the company's administrative offices, as well as the Vanderminden family also moved to Granville. The Telescope Cot Bed & Novelty Company, named for the telescoping legs on the cots and camp stools it manufactured, provided steady employment throughout Robert's teenage years. At 14, he worked in the sawmill yard; at 15, he added responsibilities for repairing sewing machines in the sewing room; around 16, he moved to the machine shop where he welded and made storage racks. He ventured outside the family business long enough to spend a year at the Coast Guard Academy, where he developed a love of sailing, and to earn a degree in mechanical engineering at Rensselaer Polytechnic Institute. But the hiatus was short-lived. Even before he graduated, he began driving home on weekends to redesign the company's line of wood furniture. Thus, began more than 60 years of innovative product, machinery, process and plant design that transformed both the company, and eventually, the entire casual furniture industry. Bob's designs helped the company win many awards over the years, but the 2008 Design Excellence Award for his popular Windward Sling Collection design is worth special note, since the designer was not only in his 80s, but also by this time suffering from macular degeneration, a disease that rendered him legally blind. He was named to Telescope's Board of Directors in 1967 and became the executive vice president of the company in 1971. He was CEO from 1989 until 2001, when he was named Chairman of the Board. Bob considered his greatest gift to the success of Telescope was bringing up five kids with his work ethic, who have passed it along to their children. "His goal was always to get everyone pulling in the right direction to get a job done, without regard for titles or turf." He applied the same teamwork approach to his civic endeavors. He combined his personal passion for Little League with more than 60 years of Telescope corporate support to create a Granville league organization that involves more than 500 youngsters from local and surrounding communities. His children shared that "as hard as he worked, he always had time for his family. Every Sunday, we would all go to church in our brightly colored ski clothes and as soon as the last hymn was over, the whole family headed for the slopes in their Pontiac Station Wagon." Bob was the recipient of the prestigious Lifetime Achievement Award from the International Casual Furnishing Association which is reserved for individuals who have made exemplary contributions to the casual furniture industry and to their individual communities. Bob will forever be remembered for the investment he made in a lifetime nurturing three treasures: his family, the business his family owns, and the community where both reside. Bob was predeceased by his parents Henry and Cecile, his brother Henry J. W. Vanderminden III and his wife Lois (Clarkson) Vanderminden. Survivors are his five children: Robert D. Vanderminden, Jr. (Mary) of Saratoga, NY and children: Robert D. Vanderminden III, Jennifer A. Vanderminden, Adam Vanderminden (Kate), Jared Davidson and Hannah Davidson; Katherine Juckett (David) of Granville, NY and children Kaela O'Grady (Bruce), Sarah Warren (Jacob), Greta Pisani (Matthew), Kaitlynn Warren (Edwin) and Maxx Juckett; Nancy Vanderminden Winchell of Hebron, NY and children: Ciara Aiken, Christopher Aiken, Lyndsey Smith (Jacob) and Timothy Winchell (Ashley); Carol Scott of Granville, NY and children Jessica O'Brien (Gregory) and Robert Scott (Tarah) and William Vanderminden (Meredith) of Queensbury, NY and children Luke Vanderminden and Grace Kip. In total, Bob was blessed with 16 great grandchildren. He is also survived by his beloved sister-in-law, Virginia Martin of Dixon, IL. A Celebration of Bob's life will be held on Wednesday, January 2, 2019 at 1 PM at the Telescope Casual Showroom located at the factory at 82 Church St., Granville, NY. The family will receive visitors from 10 AM until the time of the service at the showroom. Burial will be private. In lieu of flowers, memorial contributions may be made to Granville Little League, 82 Church St., Granville, NY. 12832 Funeral arrangements were entrusted to the Robert M King Funeral Home, 23 Church St., Granville, NY.
To send flowers to the family or plant a tree in memory of Robert Vanderminden,Sr., please visit Tribute Store
Wednesday
2
January

Share Your Memory of
Robert
Upload Your Memory View All Memories
Be the first to upload a memory!
Share A Memory
Send Flowers
Plant a Tree