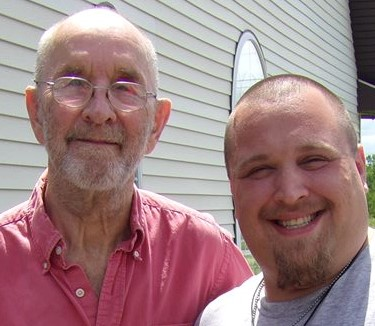 Please share a memory of Donald to include in a keepsake book for family and friends.
View Tribute Book
Donald Freely McCasland (June 4 1940 - November 26 2020) Jesse Lee McCasland (September 14 1983 - September 13 2020) Donald Freely McCasland, for many years known as "Chuck the Barber", passed away quietly and peacefully Thanksgiving day 11/26/2020 in Rutland Regional Hospital. Only a few months earlier, on September 13th his youngest son, Jesse Lee McCasland had unexpectedly joined their family of angels in heaven. With Chuck's illness and mobility issues he expressed he would not be able to go to a service for Jesse. An in-house prayer service was scheduled and then postponed due to Chuck's illness. A double prayer service for Chuck and Jesse will be held at their home in Granville on Saturday December 5th 2020 at two pm. If unable to attend please stop another time. Chuck was born and raised in Lake Placid, NY, the son of James and Minnie McCasland, with sisters Violet and Roberta. He was on the football and hockey teams, played in the high school band, and toured the North Country playing drums with a band composed of his talented Aunt and cousins, playing popular tunes and square dancing. After high school he proudly joined the U.S. Army and served in the 101st Airborne as a paratrooper based in Clarksville, TN. After his military service, Chuck began his career as a barber in the Morristown area of New Jersey. There he married and had his first son, Donald, who also served and retired from the 101st. In 1977 Chuck married Mavis Makarick and moved to Queensbury, NY. There he opened his own barber shop Shear Image in the Sokols' Market complex. In 1983 his son Jesse was born, to be near his school, Chuck opened and later retired from Chuck's Hair Center, a barber and beauty shop on Main Street in Granville, NY. Chuck was a life-time member of the American Legion Post 323 of Granville, NY. For a number of years he was the Legion's Service Officer and participated and led their Color Guard. Chuck was also very proud to serve at the Gerald B. Solomon Saratoga National Cemetery where he was part of and led the Monday Honor Guard. Like his father, Jesse was a member of his high school football team, played drums as a hobby, in the Granville High School band and for a period of time at his church. Jesse was also very patriotic and for a number of years, served with the Sons of the Legion and participated in many parades driving the Legions' Deuce and a Half. Jesse was a caring, giving person who quietly always helped a friend in need. Unknown to him, Jesse had been baptized as an infant at the Lutheran Church of the Good Sheperd in Glens Falls. As an adult Jesse returned to church and was baptized again in 2014 by his friend Pastor Derik Bartholomew at Cornerstone Outreach Church. For many years Jesse also volunteered each week at the church run food pantry. Chuck was known for telling jokes, his terrific Donald Duck impersonation which still impressed his nurses in the hospital. And to tease Jesse, Chuck disliked the NY Yankees and Dallas Cowboys. Jesse was known for his smile and laugh, love of being part Irish and German, the NY Yankees, Dallas Cowboys, Nascar Dale Sr. and Jr., WWE wrestling, attending music concerts, playing his drums and caring for and raising his pigs. They both loved to fish for trout in the streams and the Mettawee River, and catfish in the canal. They especially enjoyed deer hunting on the property and during the many family trips over Thanksgiving to Jesse's Uncle Bill and Aunt Janet's in WV, making and eating the venison bologna, and returning home with many antlers. Chuck and Jesse are survived by wife and mother Mavis, son and brother Donald, his wife Joanne and their children Angela and Ian of TN. And survived by the children and families of Chuck's sisters: James in TX, Michelle of NY, Scott in SC, Chad in UT, and in heaven Shawn. Also survived by Chuck's mother-in-law and Jesse's grandmother: Jean Edwards, her daughter Janet and husband Bill Roberts of WV and her son Martin Makarick and his daughter Katie of NY. Also by Great Aunt Margot Winter of PA, Great Aunt Nancy Hinson of NC and numerous cousins and their families Leslie, Toni, David, Steven of NC and Charles Render of NJ. Thank you to the family of neighbors, friends, nurses, and family who have helped Chuck and Jesse over the last few years and the last few difficult months. In lieu of flowers please send any gifts in their names to help local people in need through Jesse's church, Cornerstone Outreach Church 1767 State Route 196 Fort Edward, NY 12828 or their food pantry at https://regionalfoodbank.net/agencies/cornerstone-outreach-center-food-pantry/
To send flowers to the family or plant a tree in memory of Donald McCasland, please visit Tribute Store
Saturday
5
December

Share Your Memory of
Donald
Upload Your Memory View All Memories
Be the first to upload a memory!
Share A Memory
Send Flowers
Plant a Tree