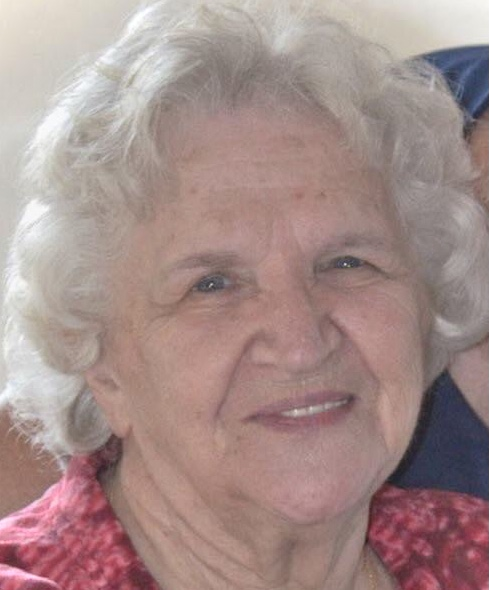 Please share a memory of Hazel to include in a keepsake book for family and friends.
View Tribute Book
Hazel G. Ehntholt North Granville, NY - On February 28, 2021, Hazel G.(Hoyt)Ehntholt , left this world just as she had entered it, with her family celebrating her life. She started life on September 23, 1933, and was cherished by her parents Lawrence and Zoa (Smith) Hoyt. She would take her place in her first family including 12 children. Hazel graduated from Granville High School in the year of 1951, and spent her whole life locally, and raised her family in Truthville, NY. She worked many years at General Electric in H.F. /F.E. until her retirement in 1993. Hazel's joys in life were numerous since she was loved by all that knew her. She was adored by her 7 children, her 17 grandchildren, and her 31 great grandchildren alike. She played a huge role in each one of their lives. Her calendar on the wall marked with all the birthdays and anniversaries reflected the love she shared with each and every one of them. Her family learned to look forward to her phone call or card when it was their special day. Neighbors and community members have always responded with what a "nice lady" she was. To know her was to love her. Her backyards birds flocked in to see her, literally. Her feathered friends consisted of many finches, chickadees, bluebirds, and orioles, but she was especially fond of her cardinals and hummingbirds. She often got pleasure from watching the rainbow of colors that came to visit. She was a dedicated New York Yankees fan. Any visit with her, during playing season , would surely include the score from last night's game. Her sleep pattern often changed depending on the game schedule. Favorite player seemed to be Paul O'Neill. Hazel's survivors include six of her seven children. Those children are Gail West (Fort Ann), Connie Taylor (Bill) (Middle Granville), Ronald Ehntholt (Sherry)(Granville), Karen Noble(John )(Hampton ), Pat Baptie (Truthville ), and John Ehntholt (Maureen)Saratoga Springs). Hazel was predeceased by her son, Peter Ehntholt, Jr. , in 2019, whom she stole a quote from and made it her own, "Funner than Hell ! ". She was also pre-deceased by her lifetime companion, John (Butch) Pangmon , Jr. Hazel's only surviving sibling is Dorothy Baker from Hartford, NY. to which she shared a nightly 7 p.m. phone call with. Survivors should also include a special friendship with her nephew Kenneth (Ken) Hoyt, Jr. who often looked out for her. Hazel was pre-deceased by siblings, Clarence Hoyt, Lorena Holcomb, Alice Fogg, Kenneth Hoyt, Sr., Mary Tanner , Donald Hoyt, Ralph Hoyt, Roger (Bud) Hoyt, Helen(Betty) Harrington, and Shirley Stanford. In lieu of flowers, the family is recommending donations be made to either the North Granville Fire Department, the Granville Rescue Squad, or St. Jude Children's Research Hospital.
To plant a beautiful memorial tree in memory of Hazel Ehntholt, please visit our Tree Store

Look inside to read what others have shared
Family and friends are coming together online to create a special keepsake. Every memory left on the online obituary will be automatically included in this book.
View Tribute Book
Services for Hazel Ehntholt
There are no events scheduled. You can still show your support by planting a tree in memory of Hazel Ehntholt.
Plant a tree in memory of Hazel

Share Your Memory of
Hazel
Upload Your Memory View All Memories
Be the first to upload a memory!
Share A Memory
Plant a Tree