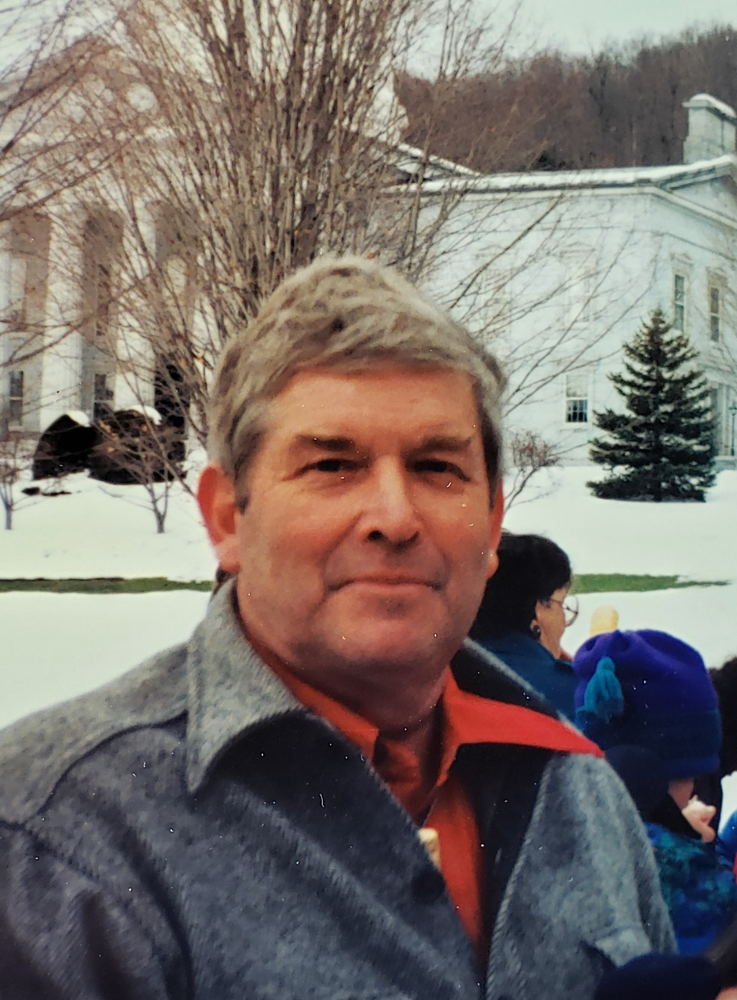 Please share a memory of Wilson to include in a keepsake book for family and friends.
View Tribute Book
Wilson S. Clark Pawlet, VT – On Tuesday, May 18th 2021, Wilson S. "Bill" Clark, loving husband and father of four children, passed away at the age of 89. Bill was born on June 29,1931 in Granville NY, the son of Wilson H. Clark and Dorothea Streeter. He was predeceased by his brother Jack Clark and sister-in-law Dawn Clark. He is survived by his wife of over sixty years, Sue Clark, his brother Leon Clark, sister-in-law Barbara Clark, his four children David (Laurie) Clark, Daniel (Liz) Clark, Sarah (Jim) Pesler, and Seth (Sherry) Clark, his many grandchildren, and his beloved dog "Tadmer". Bill was a family man who loved his family deeply and frequently told his children how proud of them he was. Bill was a 5th generation Vermont Clark who grew up on the farm owned by his family since 1848. His father passed away when Bill was only 27 years old. He then ran the farm for the rest of his life. Bill started maple sugaring when he was 6 years old. In 1944 at age 12, he and his brother Jack formed the Clark Brothers Maple business that later expanded to a mail order business for customers all over the country. They built their first sugarhouse in 1945 and Bill expanded this to a large sugarhouse in 1957 that was open to visiting customers. He had a selfless passion for the Vermont maple syrup industry, was a mentor, friend, and teacher to countless people all over the state. He supported the entire industry, promoting maple at every opportunity. He believed a rising tide lifts all boats, and in doing the right things for the right reasons. Bill served as president of the Rutland County Maple Producers (RCMP) for 8 years, the Vermont Maple Industry Council, the Board of Directors of the Vermont Maple Sugar Makers Association (VMSMA), and then president of VMSMA for 32 years from 1969 to 2001. He was president of North American Maple Syrup Council for 8 years, organized the first Vermont Maplerama, and was president and part organizer of the Vermont Agriculture Enterprises that manages the Vermont building in Eastern States Exposition. In 1974 he helped create the International Maple Syrup Institute (IMSI) between the United States and Canada and served as its president for a two year term. As part of his VMSMA service, Bill drove hundreds of thousands of miles around Vermont attending hundreds of board meetings and representing VMSMA in hundreds of UVM Extension Maple Schools, while visiting essentially every town in Vermont. He served on several governor's agriculture advisory committees, attended county maple meetings, presented at the Vermont Farm Show and at multiple international meetings. His service to Vermont agriculture totaled 51 consecutive years presiding as president of agricultural organizations. In addition to his maple syrup business, Bill was a carpenter and stone mason, constructing buildings and chimneys in the local area that still stand today. Beginning in 1977, Bill and his family raised vegetables and produced many baked goods that were sold at the Rutland and Poultney farmers markets for over 40 years. For 11 of those years, he was president of the Vermont Farmers Market Association. He also Founded the Grow A Row project for Rutland Area Food and Farm Link (RAFFL) to help provide locally grown fresh vegetables for seniors, children and the needy. Bill won numerous awards and recognition for his leadership in the maple industry and agriculture, including Sumner Hill Williams award for Lifetime Service to the Vermont Maple Industry, the Lynn Reynolds International Leadership award, Vermont Farmers Food Center Lifetime Achievement Award, and the Eastern States Exposition Agriculture Adventurers award. He was named the "Unsung Hero" of Vermont Agriculture by Vermont Agriculture Experiment Station, inducted into the American Maple Museum Hall of Fame and Vermont Agricultural Hall of Fame. His leadership of the VMSMA culminated in "Bill Clark Day" at the Vermont Farm Show in Barre, Vermont honoring his 32 years of service. Bill attended the United Methodist Church of Wells, Vermont for his entire life. He sang in the choir and served as a Sunday school teacher, superintendent, and trustee. He donated endless hours of time to fundraising for the Wells Church. He spent over 30 years helping the church's Mission Event raise money for local missions, and national and world disasters, raising almost $100,000 in donations over that time. His faith shaped him and gave a purpose and direction to all parts of his life. Bill loved Vermont and was a lifelong supporter of it. He had a passion for downhill skiing reading up on it in books and magazines and comparing elevations and vertical drops between ski areas. Ironically, his love of maple outweighed skiing to the point where he didn't ski for fear of an injury forcing him to miss the following maple sugar season. He collected license plates (some are now over one hundred years old) and glass and ceramic electrical insulators. His impact on Vermont, agriculture, and the maple industry was profound. His outreach and impact on his church and in helping the needy was profound. His impact on friends and colleagues was profound. His love for his family was deep and everlasting. He will be missed so much by so many. We kindly ask for donations in his name to the Mission Event of Wells United Methodist Church, or donations to the church directly, P.O. Box 811, Wells, VT, 05774.
To send flowers to the family or plant a tree in memory of Wilson Clark, please visit Tribute Store

Share Your Memory of
Wilson
Upload Your Memory View All Memories
Be the first to upload a memory!
Share A Memory
Send Flowers
Plant a Tree