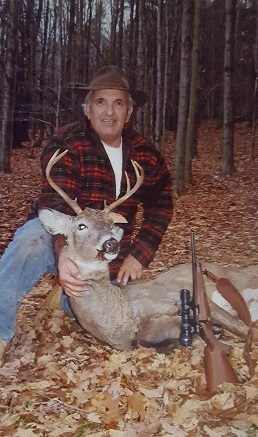 Please share a memory of Roscoe to include in a keepsake book for family and friends.
View Tribute Book
Roscoe "Dolly" Stark Whitehall, NY - On Wednesday, May 19th, the Stark family suffered a tragic loss of their patriarch, Roscoe Stark. Roscoe was born January 28th, 1944, in Fort Ann, NY, to Herbert and Evelyn (Lucas) Stark. Roscoe grew up with a passion to be the hardest worker he could be. He was a proud member of Laborers Local 452 and 157 for over 30 years until his retirement in 2001. His work ethic was unmatched. When in conversation with anyone during the day, "Why ain't you working?" was his greeting. He was a member of the Eagles Club in Fair Haven, VT. He was an avid hunter, fisherman, and outdoorsman. He loved his hunting trips to Ohio and Illinois with his son Todd. Growing up on a farm, he had a great passion for gardening and tending to his many animals, especially his goat, Billy, and his favorite cat and napping pal, Oscar. One of his last and most proud accomplishments was building his rustic "mancave". That's where he would enjoy a cold beer while listening to music with his loving wife, June. He met June in 1965. They were married July 1st, 1966, and raised 6 children; Todd, Heather, Roslyn, Sommer, Courtney, and Roscoe "Boogie". He and June spent all their time together, going for drives, yard sale browsing, proudly maintaining their beautiful 49-acre property, and enjoying time with their children and grandchildren. Roscoe is predeceased by his parents and his sisters, Frances Loiselle and Roberta Frasier. He is survived by his beautiful wife June, his children; Todd Stark (Claire), Heather Stark (Mike), Roslyn Stark-Lambert (Randy), Sommer Scarfo (Jeff), Courtney Stark (Pete), and Roscoe T. Stark, his grandchildren; Drew Martindale, Zoey Lambert, Maya Scarfo, Amelia Scarfo, and Parker Hilder, his sisters Beatrice Stark and Toni Stark, and his Brother Herbert "Bum" Stark. There will be no calling hours. The family will have a celebration of life at his family home Saturday, June 5th, at 1:00 PM.
To plant a beautiful memorial tree in memory of Roscoe Stark, please visit our Tree Store

Look inside to read what others have shared
Family and friends are coming together online to create a special keepsake. Every memory left on the online obituary will be automatically included in this book.
View Tribute Book
Services for Roscoe Stark
There are no events scheduled. You can still show your support by planting a tree in memory of Roscoe Stark.
Plant a tree in memory of Roscoe

Share Your Memory of
Roscoe
Upload Your Memory View All Memories
Be the first to upload a memory!
Share A Memory
Plant a Tree