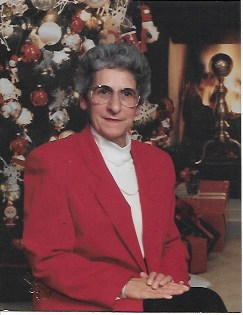 Please share a memory of Mary to include in a keepsake book for family and friends.
View Tribute Book
GRANVILLE - Mary Ann (Ruoto) Hughes peacefully passed away in her sleep in the early morning hours of Saturday, May 22, in Granville, NY, after a lengthy illness. Born Jan. 21, 1928, at St. Mary's Hospital in Troy, NY, Mary was the second of three children born to Rocco and Jennie (DeBonis) Ruoto. She was predeceased by her parents and her older brother, Theodore. Growing up during the Great Depression, Mary worked hard to help her family survive lean times when her father - who was a barber by trade - and mother were struggling to keep their home on Congress Street in Troy. In fact, while Mary was still attending Catholic school, she and her brother took on extra jobs, she at Montgomery Ward from 4 to 9 p.m. on school days and "Teddy" as a milkman. Perhaps this is when Mary adopted one of her favorite mottos: "Every problem has a solution." During those early years in Troy, Mary would spend summers in Poultney, Vt., at her Grandmother Debonis's farm. It was on a summer's day when she happened to be visiting Granville that a young man with a cute wave in his hair and rosy red cheeks whistled at her as she was walking down Main Street. This flirty young fellow was Donald Hughes, a Granville native who from then on continued to woo Mary, even when he was far away while serving a stint in the Army. Mary later recalled with a laugh and a shake of her head that Don would call every night - COLLECT! - just to keep in touch. Those collect calls were always accepted, and it wasn't long before the two were married, not once but twice: first by a Protestant minister on July 19, 1947, and then again a year later by a Catholic priest to please both sides of their families. From that point on, the two were "always together" for the next 59 years until he left this earth on May 10, 2006. Mary and Don began their married journey together in Granville. Although she had wanted to be a nurse as a young girl, her family could not afford it. So now as a young bride, she said she "decided my dream was history, and I made the best of my life and enjoyed every day." And what a life she and Don built during those early years, first on Pacific Street and then at 19 Williams Street. Living in Granville was an adjustment for Mary, who had grown up in a much larger city. But with her ready smile and infectious personality, she made friends easily and became an important piece of the community's fabric. Whether it was as a cashier at Edward's Supermarket or during her years as a cafeteria worker and teacher's aid at Granville High School and Elementary School, Mary was loved by customers, co-workers and students who couldn't help but smile and laugh at her quick-witted banter and self-deprecating sense of humor. As she and her husband were tirelessly turning 19 Williams Street into a wonderful home, they also raised "three beautiful daughters." In Nancy, Donna and Sharon, Mary and Don experienced their greatest pleasures in life. Mary was so very proud of her daughters' many accomplishments and achievements, as well as those of their children and children's children.
To plant a beautiful memorial tree in memory of Mary Hughes, please visit our Tree Store

Look inside to read what others have shared
Family and friends are coming together online to create a special keepsake. Every memory left on the online obituary will be automatically included in this book.
View Tribute Book
Services for Mary Hughes
There are no events scheduled. You can still show your support by planting a tree in memory of Mary Hughes.
Plant a tree in memory of Mary

Share Your Memory of
Mary
Upload Your Memory View All Memories
Be the first to upload a memory!
Share A Memory
Plant a Tree