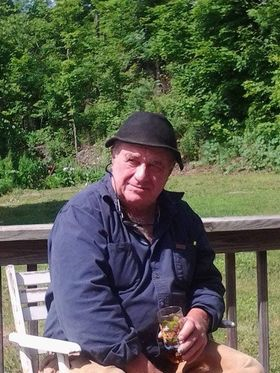 Please share a memory of Kenneth to include in a keepsake book for family and friends.
View Tribute Book
Kenneth L. "Lee" Thomas, Jr. Middle Granville, NY – Kenneth Leland "Lee" Thomas Jr., age 77, passed away on January 12, 2022, at Glens Falls Hospital following a brief illness. Lee was born on May 12, 1944, in Whitehall, NY the son of the late Kenneth L. and Alice (Brooks) Thomas. He was a graduate of Fort Ann High School. He married the love of his life, Marilyn J. Jones on November 13, 1965. In an effort to provide for his growing family, he tried on many hats. The one that stuck was the felt hat we all know him by and being a "concrete professional." He was purported to be known as the "father of concrete" throughout the Slate Valley. It seems that he was working a job for Clarence Armor at a point, and Clarence convinced him to work for him in the concrete business. Which he did. Eventually branching out on his own. He was known far and wide for his work. Over his 52 years in business, each of his children had the opportunity to work with their father in some capacity and take away from it what they would and will always treasure the memories and lessons they learned. In addition to Marilyn and Lee, the Thomas family was comprised of four children. However, being the neighborhood parents with big hearts, their door was literally always open to whomever needed it. Children were always welcome whether it was for lunch or a change of address. Lee was a people person. Breakfast was not only about nutrition, but the social aspect. For years it was breakfast at Scotties. When the payphone would ring at 6 AM the waitresses didn't bother to answer because they knew it was some contractor needing Lee or the concrete company calling about an order to be delivered. It became known as "Lee's Office." He eventually moved his breakfast place to the Pine Grove and had to resort to a cell phone since pay phones were no longer an option. He ate lunch at various haunts throughout the area, depending on the location of his pour. There were always friends to meet up with at various taverns to talk over the days work, making new friends and visiting with the old. Stewarts was another favorite of Lee's to stop for coffee and conversation. He was a fan of Stewarts milk. As is the case with everyone, Lee had different relationships with each of his children, but love was the common denominator. They will each treasure special shared moments with Lee. The love extended to the grand and great grandchildren as well. He was predeceased by his parents, and siblings Richard Thomas (1951) Elaine Thomas (1951) and Betsy T. Darius (1978) After his beloved wife Marilyn passed in 2012, no one ever filled the void in his heart or his home. Lee is survived by his four children: Ken Thomas (Sue) of Middle Granville, David Thomas of Granville, Beth Goodspeed (Kevin) of Fort Ann and Sheri Thomas of Scamperville, VT. He was blessed with twelve grandchildren: Ridge (Harley), Taylor (Shay), Katarina (Leo), Tristan, Devon (Chris), Kyla (Tyler), David Jr. (Maria), Ryan (Angelina), Russell (Ashley), Kevin Jr (Amanda), Travis and Seth (Makayla) and 19 great grandchildren: Makenna, Xander, Ryder, Tildy, Elli, Lorraine, Lilly, Ryland, Skylar, Charlie, Whitney, Marilyn, Harper, Ryker, Amya, Wesley, Hayden, Kevin III and Kailey. Left to treasure his memory are his siblings: Les (Victoria), Jean, Nancy (Billy), Susan (Ed), George (Rosalina), Joe (Jennifer) and brother-in-law John Darius (Sandy). Visitation will be held on Friday, January 21, 2022 from 4-8PM and Saturday, January 22, 2022 from 2-3 PM at the Robert M King Funeral Home, 23 Church St., Granville, NY. On 3PM at Saturday a funeral service will be conducted by Rev. Jerry McKinney. MASKS MUST BE WORN WHILE IN THE FUNERAL HOME. Following the funeral, the celebration of Lee's will be continued at the Granville Family Diner, formerly known as AJ's Restaurant (Lee's other office location) at the Big Lots Plaza in Granville (Quaker St.) Online condolences may be made at www.robertmkingfuneralhome.com.
To plant a beautiful memorial tree in memory of Kenneth Thomas, please visit our Tree Store

Look inside to read what others have shared
Family and friends are coming together online to create a special keepsake. Every memory left on the online obituary will be automatically included in this book.
View Tribute Book
Services for Kenneth Thomas
There are no events scheduled. You can still show your support by planting a tree in memory of Kenneth Thomas.
Plant a tree in memory of Kenneth